A while ago I posted about  Sarah Kay’s Ted Talk on Spoken Poetry.

It made me reflect on my own style of talking and how much it has been influenced by various factors probably one of the most important being I was born in California.

Look I even got linguistic test results to prove it: 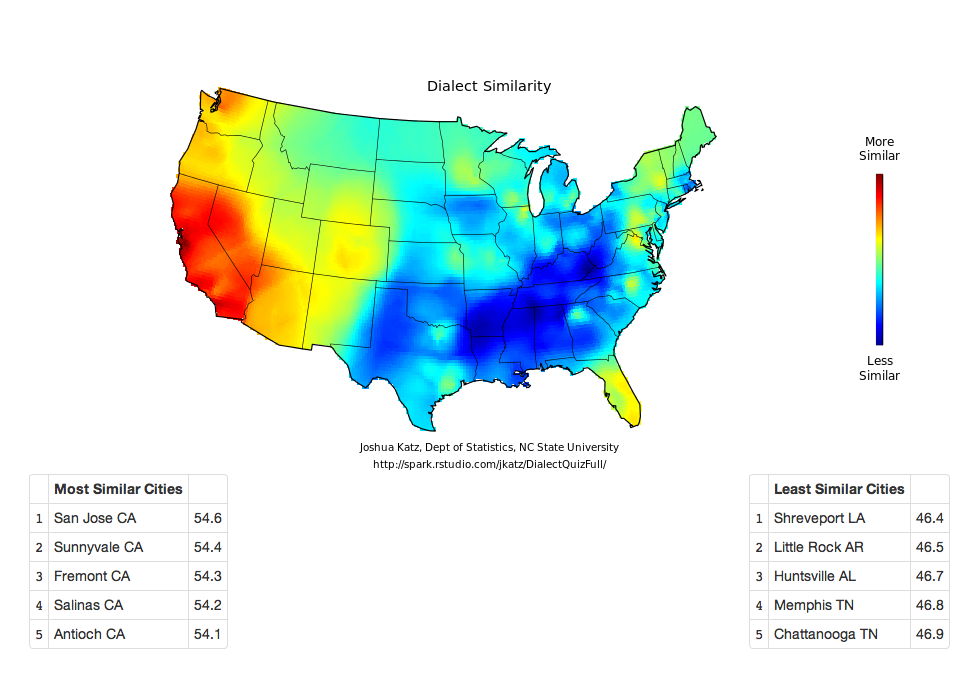 I remember when I first moved to the East Coast I thought to myself:  People here sound different than the people at home.

Then I all but forgot about it after being on the East Coast for many years. Then when I was in college I took an Alternate Reality Game class. While working on a group project I mentioned to my group members that I grew up in California.

A guy in my group said, “Oh! That makes sense.”

I was curious. “Really? How do I sound like?”

Then he seemed to get a little flustered, like he didn’t want to say I sounded like a valley girl or something. He ended up saying something along the lines of “The way your voice rises and falls sometimes, it just sounds very Californian to me…”

I never found out if he meant “You sound like you’re from California” as a good or bad thing…..

Some of the most common Californian things I say are as follows:

I would be more than willing to scrap this part of my vocabulary which as I use as a filler word. Actually, I feel my time in Korea has cut down on me using this word, except in situations when I am excited and talking extremely fast to English native speakers.

I say “I know, riiiight?” whenever someone mentions something I agree with.

I say, “Totally!” and “Dude!” all the time. I have even said “DUDE” to my mom before  a couple of times which makes her irate: “I am not a DUDE!” Nope, definitely not. Not sure why I say it, but it just feels normal to say it to everyone.

Funny story: A older Korean man at my middle school dropped his keys as he was walking down the hallway. I noticed, picked them up and then since he was so far away from me and headed downstairs, I started saying “Hey! Dude! You dropped your keys”

Of course, he didn’t turn around; thankfully another Korean teacher yelled “Seonsangnim!” which means Teacher in Korean, and he turned right around.

Later I thought about how I called him “Dude” which, if he had understood me, would had annoyed him since “Dude” is not a respectful term of address. Korea is all about titles of respect.

Overall, I like that some people can identify me as being from California. It’s my homehomehome. 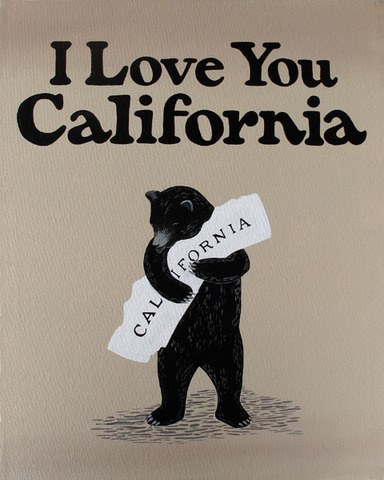 Something I encountered back home  in America which I wasn’t expecting to encounter is the fact that people here, my family included, seemed so surprised that I  can read and write Korean.

Wow! You can read Korean!?

Maybe it is the fact that they have little knowledge of the Korean language.

When I first moved to Korea knowing no Korean I thought it would take forever to learn how to read and write it.

And it did take me a while, more than some people who moved to Korea at the same time as me.

But to me it seems ridiculous to live in a country for 1 year and never learn how to read the native language or write basic sentences.

I would compare my level of Korean to the level of English some immigrants to the USA have.

I know Survival Korean. I can understand a little Korean, I can read signs (even if I don’t always know what it means) , I can say essential sentences like “Where is the bathroom?” “This is delicious!” “I will meet my friends tonight to go shopping.” “Korean is hard!” “My head hurts.”

If I can’t fully get my point across in Korean, or the Koreans I am talking to can’t speak English too well, then I use hand gestures, body language or my trusty friend called Google Translate.

Actually, Google Translate sometimes does such a horrible job of translating, but it’s better than nothing when you are desperate.

According to an article I read, Korean is ranked as the 9th toughest language for a English speaker to learn. I would agree there are times I find Korean quite challenging in terms of pronunciation and also remembering when to speak politely and when you can speak normally to your friends.

But, what helps a great deal to learn Korean is that the writing system is really easy once you have memorized the characters. Also, the pronunciation of words is mostly phonetic, with some words trying to trick you here and there.

While I have taken various Korean classes and have studied with friends, colleagues and students, I know my Korean could be a lot better than it is now.

However, most Koreans, especially young people, want to speak English with me to practice their language skills. If I say something in Korean they will often answer in English assuming they don’t start giggling hysterically.

I can get by in Korea fairly easy knowing only a little Korean.

I am not sure how much longer  I will live in Korea, but I am doubtful it will be forever. So while I am game to learn more Korean, I know that my ability might only go so far because learning  Korean is not my  #1 priority living in Korea.

Regardless where I will end up next, I know I will learn the basics of the native language so that I can survive.

survival of the fittest

In less than a day I am going home for the first time in almost a year.

I am curious as to what kind of culture shock I will experience when I am there.

I know that Korea has changed me in many ways, but I am curious how much that will affect my perception of both the people in America and American customs….

I had to read  almost 40 students’ essays for a writing competition. The highlight of what I read (a combination of really funny and great words of advice):

“My favorite sport is baseball. Because I always watch it with a cliffhanger.”

“Young Gyu is faster than other members and Sun bin is cute in KIA, but my favorite member is Na Ji Won. He is fat and looks like a pig. so he is called “Doe Ji Wan” . It means “Pig” but he is cute and a good home-Run guy.”

“I watch baseball game every day. Do not forget.”

“Hold the locket down and then when the ball come to you, hit that ball.”

“Second, it is effecting to lose your weight. Many people always think about their weight. It’s their problem. If you will join the badminton you will solve it easily. For example, I will tell you my friend Ji Hee’s story. She was a little fat when she was young, so always played badminton with her mother .Today she lost her weight. Also she got healthy body too.”

About Swimming: “I think learning swimming is terrifying at first because I felt some nameless fear when I gold my breath in the water… However I like swimming I feel smooth and fresh when I’m in the water.”

About Basketball: “Game is so hard, but that is opportunity to remove your fat…. I feeled I am destiny in basketball. So I started basketball at 15 years old and known as “Got of Basketball”  or Michael Jin.”

“I feel very exciting after reading the book. I want to magic power. Finally thank you for reading here.”

“The book is called “The Prejudice and Arrogance” <—- instead of  “Pride and Prejudice.”

“When he was the same age as me, he poured paints into the river with eyes full of curiosity.”

About Twilight: “And I want to write my love story like this book.” 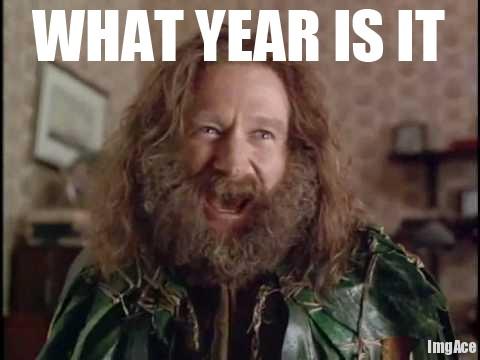 I legit thought it was 2:30pm and I slept through the whole school day. I jumped out of bed in a panic before taking a look outside and realizing it is still pitch black.

I think this is partially due to the fact my watch has the AM/PM flipped and I’ve been too lazy to change it for the past 3 months.

Case in point: a month ago at a party one of my friends, Erin, was talking about her favorite book series “The Queen’s Thief” by Megan Whalen Turner. She told us that she wrote her 15 page senior thesis paper on it.

I immediately demanded that I read it. It sounded interesting.

Erin looked at me as if I was crazy.

Erin: Why would you want to read my 15 page paper I wrote forever ago?

Sarah: Why wouldn’t I want to read it?

Everyone else: Really? You want to read an academic paper???

Cue more strange looks all around.

I really don’t know when exactly I morphed into a person eager to read book analyses. Maybe it is due to the fact  I graduated college two years ago. Shocking!

Or maybe it’s because I actually feel inspired lately to write my own an academic paper simply because it sounds like fun. Double shock!!

Anyways, Erin told me: If you are going to read my paper, you have to read the books first. Otherwise it will ruin the books.

I dropped $20 on the trilogy and started reading them on my Kindle. Kindles are quite possibly the best invention ever, despite my love affair with real paperback books.

Personally,  I am not the biggest fan on the “Queen’s Thief” series because I think Turner has issues with pacing. Sometimes I would be reading and I would feel really bored, other times the action was great and I couldn’t put the books down.

I feel like this was an issue in all three books and the only thing that kept me reading was the fact that I wanted to read Erin’s analysis.

When I finally finished the book series and finally got to read Erin’s paper (despite the fact she kept insisting that I really wouldn’t want to read it) I have to say I felt an enormous sense of satisfaction.

One downside of living in Korea is that I don’t always get to discuss books and literature and various other things with people as in depth as I would with my friends back home. I feel like most of the time here I don’t have time to read and even if I do, most of the Koreans I interact with would be overwhelmed/incapable of speech if I suddenly tried to do a literature/ cultural analysis with them.

I think my intellectual/academic interests are sometimes swept under the rug here, so the opportunity to engage the analytic part of my brain is enticing to me.

Being a huge fiction nerd I never thought I would say that that I thoroughly enjoyed reading academic writing. But enjoyed it I did. I think my time at UMW has rubbed off on me.