Although I have many projects I need to attend to, one that I’ve been thinking about for a while is doing another mashup.

But to explain why I want to do this mashup, I need to discuss my first stage performance ever.

When I was in first grade I got selected to play a munchkin in the stage production of the “Wizard of Oz” that my elementary school was putting on. I looked like one of these munchkin women, except a lot cuter.

My one and only song for the show was “Ding-dong the Witch is dead.” For weeks before, during, and after the show, I would apparently sing it nonstop, much to the annoyance of my family.

Even now, I can be found randomly humming or singing this part of the song:

From my *star *performance in the play, my love of the “The Wizard of Oz” was born.  I used to watch the movie version all the time. I have read every book in the Wizard of Oz series by L. Frank Baum; my favorite is definitely: “Ozma of Oz.” I enjoy finding cool Wizard of Oz Memorabilia. For a time I even had sparkly ruby slippers just like Dorothy.

mine were just as cool

Sadly, my feet outgrew them and I had to give then away (I am still kinda sad about this!) For me, the Wizard of Oz isn’t exactly an obsession because I don’t think about it all the time, but its definitely something I like a lot.

So when I heard Passion Pit’s song “Sleepyhead” earlier this year, I immediately thought of “The Wizard of Oz.”

Not only is the “sleepyhead” part of the songs is a strong factor for this association, but also the beat itself reminds me of Dorothy and her crew skipping down the yellowbrick road and Dorothy’s house spinning in the tornado. 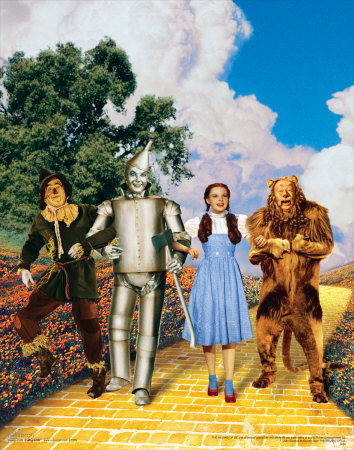 As I’m not a fan of the official music video for “Sleepyhead,” and because this song just screams for a “Wizard of Oz” mashup, one of my next projects is make my own video version for  it.

I am not quite sure when exactly this is going to get done as I am going to be running all over the place the next few months, however, I hope to get it done as soon as possible. Of course, it helps that I now have a shiny new Mac to create this video. 😀

Jim Groom and ds106 converted me to the apple family.