I sent some postcards from New Zealand in the middle of February and then sent a bunch more from OZ about two weeks later.

However, imagine my surprise when people got the postcards from OZ within in a week while the NZ postcards were yet to show up.

I wondered if this was because I bought $1.50 international stamps through Universal Mail, instead of the $1.80 stamps of the main post office in Australia. My mom joked that the $1.50 postcards were probably going to the U.S. by boat and that we would get them in 3 months.

Feeling annoyed that I spent all this time writing 13 postcards (some of NZ landscape and some of me bungy jumping) to close family members and friends and that they would possibly NEVER get them, I emailed the Universal Mail company.

The company got back to me quickly and said that it was extremely unusual for this to happen and that they would “investigate” what happened. As an additional bonus they would reimburse me for the stamps I paid for.

I am glad that they are going to reimburse me, but I am still feeling aggrieved about my postcards. I want to resend some postcards to these people from Australia, but as I have yet to leave Townsville, I will have to wait until I go to a more happening place.

So if you haven’t gotten a postcard yet, one will come eventually! (And possibly the original one from the lovely land of NZ!)

Here’s an example of one of the postcards I sent; I think it’s really funny! 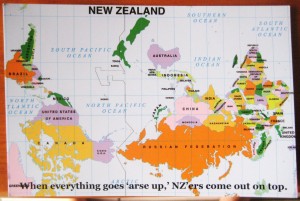