The next morning Marieke and I checked out of the hostel and ate some breakfast on the sidewalk next to the car. I don’t know why we did this because we could have eaten in the kitchen of the hostel, but we did. I think some people gave us some sketchy looks, like we were hobos or something. Scott was supposed to pick us at 9am—we figured it would easier for him to find us than for us to find him—but he was running late and misjudged the traffic so we waited for him until 9:40am.

Once Scott came, we hopped in his car (we were going to pick up our car later to follow him to his house) and headed through the city center, getting a Mini Tour. Then it was an hour drive north to the Australia Zoo AKA Steve Irwin’s Zoo in Beerwah, Australia. No, I am not kidding; it’s really called Beerwah.

The ride was really nice, love automatic cars!, and there was a lot to see. It’s right next to the Glasshouse Mountains which are very pretty, I wish we could have spent some time hiking there!

Unfortunately for us though, right as we got to the Zoo it started raining, alternating from a drizzle to a downpour. But we were there anyway, so armed with Scott’s Umbrella—I stupidly left my rain jacket in Marieke’s car and she forgot hers in Townsville– we paid $48 and entered the Zoo.

The Zoo was nice, but wasn’t exactly what I was expecting. I’m used to the free National Zoo in D.C. and the San Diego Zoo, so I was expecting the Australian Zoo to be HUGE. But it wasn’t. It was a decent size, with a focus on mostly Australian animals. We got to see a lot of crocodiles, snakes, koalas, kangaroos, tigers, elephants, echidnas, birds, etc. The Koalas were pretty cute, though all they do is sleep. Marieke and I both got to “pat” them, but when you pat them you only are patting their bum. It’s kind of funny.

I finally also got to see a wombat up close! Ever since I saw this picture of one, which I think is utterly hilarious, I’ve been kind of obsessed with them.

Such a little cutie. Marieke thinks he looks like a “gross fatty”, but I think he’s adorable!

So we got to see the wombats first in their indoor enclosure and then one in an outdoor enclosure. The one we saw in the outdoor enclosure was huddle by the gate of the enclosure with the rain streaming down. We were joking how he wanted to escape, when a keeper in a bright yellow rain jacket and green rainboots came by and told us the wombat was waiting to go on its walk. Apparently, for an hour in afternoon the keepers take some wombats on walks around the zoo, and this Wombat really loved his walk. The Keeper also asked if we had seen another Wombat in a jacket in the enclosure because she had lost it. While the rest of us were laughing about missing Wombat in a jacket, the Keeper went off calling the Wombat’s name like it was dog. 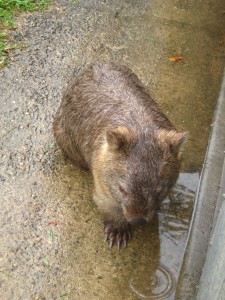 Oh, when we also talked with the keeper, I found out I could walk and pat the wombat for $40. As I did not have that money to spend, I had to say goodbye to the cute wombat and we continued around the Zoo.

A cool thing about the Zoo was how many Kangaroos they had in enclosures you could walk in. They had two enclosures with 50 plus Kangaroos hopping/ lying around in which you could pet them or feed them. It was so awesome to be inches away from a Kangaroo and to actually pet them. I had heard about them all my life, but to see one up close is so different. Actually, something I found interesting was their feet. They had really weird shaped toes.

It was also neat to see them walk around, because they have such a weird bouncing/walking motion.
After we pet the Kangaroos for a bit, it started to rain harder and we were hungry, so we went to get some food. Good thing we did too because as soon as we stepped into the pavilion it was like an ocean pouring down from the sky! Poor Marieke was freezing because it was fairly chilly from the rain and she had left her sweater in her car. After the monsoon was over, we got to see one of the Zoo’s animal shows in which they had birds flying around, a giant water snake (anaconda?) swimming around and a crocodile in action.

The show/zoo was not crowded which was nice, but this in no doubt due to the shitty weather. Once the show had finished we went to the elephant enclosure, where Marieke and I got to feel an elephant some fruit. It was such a strange feeling of feeding an elephant. It was as if it was if the cantaloupe was getting suctioned off my hand. I really wanted to pet it’s trunk, but as the keeper said “How would you feel if 30 people touched your nose in 5 minutes” (feeding the elephant was like an assembly line because there were people who lined up, fed it, then got back in line again) so I wasn’t able to.

We walked around a bit more, but before we left we went into the gift shop. Because Steve Irwin turned the place from Beerwah Reptile Park (ugh, terrible name!) into the Australia Zoo, and because he became so famous the whole gift shop is dedicated to him and his family. You can get a t-shirt of the family, along with postcards, posters, figurines, and dolls, etc. Bindi has her own doll like she is a Barbie! It’s soo creepy! I would hate to have a doll made to look like me because a doll never quite looks the same as the person; the face just gets distorted into something weird!

I was debating to buy a Bindi postcard as a gag gift to my friend Aitak, but decided if I was going to buy a postcard, I’d rather spend money on a postcard that showed some of the beautiful Australian scenery.

After the Zoo, we picked up Marieke’s car and followed Scott to his house, which was about 30 mins outside of Brisbane. He lives with his mother and sister, and so we stayed in their spare room off of the garage. The bed in the room was a pullout couch, but because the mattress was really thin, we wedged two twin mattresses on top of it. But, because the mattresses didn’t quite fit, they tilted into the middle and hung off the sides of the bed.

I didn’t want to roll into Marieke so when we turned off the light to go to bed (after a nice Thai dinner and watching a movie in Scott’s room) I tried to stay more to the edge of the mattress. I misjudged how much it was on the bed though, because I just rolled off the bed and got wedged between the couch and the wall. I literally was stuck for like 5 minutes as Marieke and I cracked up laughing at my pitiful attempts to free myself from the crevice. I felt like I was Winnie the Pooh stuck in the door for days until he was finally able to free himself. Marieke had to grab my arms and tug really hard, but finally I got free and was able to lie on the mattress so I wouldn’t roll off!