Monday Morning we woke up relatively early and went to the lighthouse in Byron Bay which is on top of the eastern most point of Australia! The view from the cliff was so pretty and we even got to see a pod of dolphins swimming!

For the next three days (Mon- Wed) we had our surf lessons at Flat Rock Beach. Not only were the waves really nice, but there was practically nobody on the beach so we didn’t have to compete for the waves. There were a couple of people who did a few lessons with us, but nobody did it as long as we did it for. I still was really bad at catching a wave on Monday; it was even worse than the first day! Our surf instructors were really encouraging even though it was an epic fail on my part. That night I went to bed around 8pm and woke up at 8am. Good thing Marieke was able to find some people to hang out with that night!

After catching up on so much sleep, it definitely showed in my surfing the next few days! By my third day (Tues) I was catching almost every wave I tried to get! My surf instructors from Baja (Mark and Mike would be so proud!) Marieke and I also scoped out the shops in Byron Bay which were pretty nice, if expensive. Like I mentioned earlier, there are a lot of hippies in town, so there are a lot of handmade clothes shops.

Now would probably be a good time to talk about Nimbin. Nimbin, Australia is like the ultimate Hippie community and destination. There are a lot of organized bus tours you can take to check out the town, meet some locals and see some waterfalls along the way. Nimbin is supposed to be very chill and I wish we had time to go to it but our days were taken up by surfing.

On Wednesday, Marieke and I drove to Flat Rock Beach instead of taking the Mojo Bus and had a nice lunch on the beach, enjoying the fact that we were totally alone on a beautiful beach! I got a lot of really nice pictures at the beach that day, like this one: 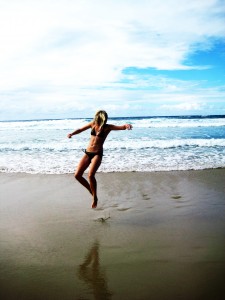 We had a different lead instructor on Wednesday who I didn’t like as much as the one we had for the other days, Huey, who was really fun to talk to.

Oh, something funny that happened that day was when our surf group met us down at the beach I was still wearing my long dress over my swimsuit because I was planning on putting on a wetsuit because the water got chilly after a while. But, by the time Marieke and I ran up to the van, got our surfboards, wetsuits, and came back down to the beach, the instructor had already started our warmup to surfing exercises, so I had to do it in my dress. There were a lot of funny pictures of me from that day (Mojo has a photographer take pictures each day of people surfing) of me trying to do yoga in my dress!

That night, Marieke, our new friend Will (who did Mojo surf with us for two days and was staying in our hostel), and I watched “Blue Crush” because after so much surfing, we wanted to see the “professionals” do it. There’s a scene in the movie where Kate Bosworth and her crew teach a bunch of football players how to surf, and they pick it up in a heartbeat. So fake! They would not be able to surf that well after just ONE lesson. Maybe after like 20 lessons. But, other than that, I really enjoyed re-watching this movie!

Oh, I forgot to mention that from Monday to Wednesday I had been working on my PR paper about Obama and it wasn’t until Wednesday morning that I finally finished the stupid thing! Once that was over, I felt like I could relax and really enjoy my vacation, but too bad it was right at the end of our surfing vacation! I don’t know if you can understand how hard it is to be motivated to work when you are staying in a hostel with lots of people to distract you and where you have a lot of better things to do like taking a walk along the beach or reading a good book! But, I did it! Props for keeping myself motivated!