We had to check out of our hostel at 10 that morning because we were going to Brisbane after our surf lesson. We decided we wanted to hang out on the beach before our lesson and have another picnic, but before we did that, we had to check the oil in Marieke’s car.

Checking the oil on Marieke’s car was something that we should have done at the start of our trip if only we hadn’t been so rushed to leave. So when I pulled out the oil gauge, I expected it to be low, but it appeared as if it was completely empty! Marieke and I found out where the nearest service station was in town and went to it.

Service Stations in Australia are a lot different than in the US. When we got there (combo with a gas station) there was no line and the guy instantly was able to check our oil and coolant level. He told us that we were right; the oil was completely empty and he was surprised we had been able to drive as much as we did. He brought over two bottles of oil and filled the tank up with about 1 ½ bottles of oil. Then he added more water to the engine, even helped fill our tires to the correct air pressure. Air for tires is free in Australia, wish we could take that back to the US! I hate having to pay for air and then running around my car to fill the tires before the air stops running.

The nicest thing about all of the things the guy did for us was that we didn’t have to pay any service fees! The only thing we had to pay for was the 2 oil bottles which cost only $23 dollars. I was expecting we would have to pay for his help, like we would if we went to Jiffy Lube or someplace similar in the States.

After that episode, we went to the town beach (closer than Flat Rock) and had a nice picnic. It’s a good thing we went with the Mojo Van that day because we actually went to a different beach. This one was a lot closer to town but still was kind of abandoned. I wish I remember the name, but I have completely forgotten!

Huey was our main surf instructor for that day, which felt very full circle. He helped Marieke and I at the beginning when we really sucked, then he got to see us when we were awesome at catching waves. We even caught a green (unbroken) wave!

We also got to see a sea turtle nest on the beach which was being looked after by a beach ranger. By seeing, I mean we saw a big roped off area and a small hole in the ground. It was really interesting though because we got to learn about sea turtle nesting habits.

After the surf lesson, since we were parked right next to a tea tree oil lake, we got to go swimming in it for about 5 minutes. Tea Tree Oil is supposed to be really good for your skin and hair and because of the oil, the lake was colored a golden brown color. It reminded me of the camp I went to when I was 15 where we went kayaking down a river lined by I think it was Cypress (?) tree where the water was turned a similar color by secretion of the tree oil. 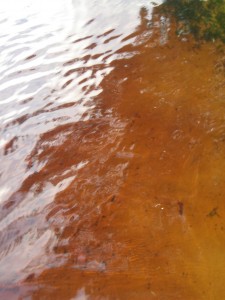 After a refreshing swim, we headed back to Mojo office where Marieke and I ordered the photos that were taken of us when we surfed. Because the shop was about to close when we got there and since this was the only time we could get the pictures, they kept the shop opened for us for an extra half an hour. Our poor surf instructor Huey had to wait for us to select our pictures then burn the CD. Once we got everything and left the shop, Huey was going to skateboard home in the dark but we convinced him we should give him a ride.

It was pretty funny because he did not seem to trust Marieke driving at all, even though she’s a good driver! (When she isn’t trying to scare you haha!) We came back to the hostel we stayed at (Huey lived nearby) because Marieke and I planned on using the showers before we left for Brisbane. We ended up talking to Huey for half an hour about surfing, his travel plans to the US and other random things. Like I said earlier, he was a really fun instructor and seemed like he could have been a good friend if we weren’t leaving Byron Bay.

Finally he skateboarded off home, we showered and then we bid farewell to Byron bay. We wanted to grab a fast dinner, so we were looking for a McDonalds on the road (they don’t have one in Byron) but there was none to be found! I drove for forty-five minutes and there was NO sign for a food exit ANYWHERE. Surfing makes you really hungry, and at this point it was around 7pm, we hadn’t really eaten anything since 12pm and we were STARVING.

We decided to get off at an exit for a town that looked semi-big and potentially had a McDonalds. The end of the exit was a stop sign, which of course I stopped at. It was really dark and only light on the road came from our car’s headlights. Then to get on the road to town, I took a right and started driving.

I only drove for two seconds when I realized something was wrong and Marieke yelled “You’re on the wrong side!” Luckily, there was no one around so I quickly cut over to the left lane aka the “RIGHT” lane to drive.
For the most part, it’s really easy to drive on the left side of the road, because there are all these signs to keep left and you’re sitting on the right side of the car anyways. But sometimes, like that night, when you are kind of distracted by various things, it’s easy to slip into a “normal” driving mindset where you drive on the side you normally drive on. It’s almost happened to Marieke a few times as well, but we’ve always noticed and corrected it before she drove on the wrong side.
Anyways, after that exciting adventure, Marieke and I drove through the town to find out there was NOTHING there. Just a typical small town. So we drove to the next town, also nothing. We ended up asking a guy working at a gas station (the only place with the lights in the town) where the nearest McDonalds was and he gave us some directions.

After 20 more minutes of driving, we finally found the McDonalds. After a quick dinner, we got back on the Highway and within an hour we were in Brisbane at the hostel we stayed at before. This time we only had to follow one road off the highway to get to it, so we didn’t get lost like last time.

Kristen, my friend I met on Contiki in New Zealand, flew in that night and took a bus to the hostel. We were so excited to see each other that even though we were tired, we ended up talking for two hours straight while Marieke was passed out in the bunk above the bed we were sitting on. Finally, we both went to bed around 12ish because we had to wake up early the next morning.