Once we checked out of our hostel, we got the shuttle bus the hostel provided into downtown Brisbane. Brisbane is a really nice city and seems very laidback.

We mostly did shopping this morning because we didn’t have time for much else. Apparently, there are some good museums here, which would have been nice to see if we were going to be there longer.

After about four hours, we caught the shuttle bus back for the hostel and set off for our five hour drive up to Hervey Bay. It was good to have three drivers because we could all switch off driving before one of us got tired. Kristen also got to drive for the first time on the left side! However, living in Canada, she already knew how to drive manual, she just needed to get used to using her left hand to shift.

It was an easy drive and we checked into our hostel around 9pm. Scott had taken his own car up from Brisbane and
arrived about an hour after us.

The hostel was so QUIET! It was nice in one way because we had to be up by 7am to get ready for Fraser, but still I expected some kind of nightlife.

Also, the bathroom in the hostel was way sketch! There was no window or fan in the bathroom meaning that the bathroom couldn’t air out like it needed so there was mold on the shower curtain. > ( 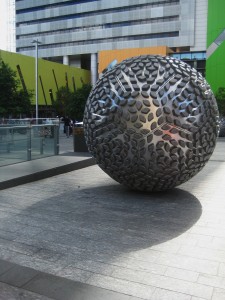