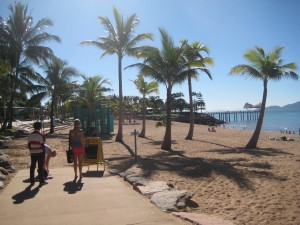 Today I had my first exam at 8.15am and I woke up at 5.30am–after going to bed around 1am– because I was feeling paranoid I would oversleep.

The test went pretty okay and I even got to write an essay on a question I was hoping would be on the exam! Afterwards I met up in the computer lab with Marieke who was working on her final draft of her bachelor thesis. Once she finished that, we decided we wanted to get some lunch then go to the beach. We ran into my friend Cecelia who also wanted to join and we even managed to get my other two roommates (though flatmate might be a better term seeing as I do NOT share a room with anyone) Karolina and Vinod to come.

The sky was a clear blue and it warm but not too hot. (Reminded me of California actually!) The stingers have all migrated, so the stinger nets were taken down and we could enjoy just swimming in the ocean wherever we wanted. The tide was really low compared to the past months and the water was colder as well so I didn’t spend that much time swimming. It was really nice just to lie on the beach and watch skydivers floating in the air before they came to a landing on the beach right next to us (I would love to skydive over the ocean and land on the beach!!)

Then we got delicious gelato from Juliette’s cafe on the strand (Ferrero Rocher ice cream is beyond amazing!) and then we drove up Castle Hill to get a view of the entire town and surrounding area. It was very pretty to go see again (I had done a hike up when my friend Kristen visited me) and because today was Saturday there were two brides having wedding pictures taken. It was funny because one of the couples we had seen on the strand earlier when they had their marriage ceremony!

Then we came home and I made a stirfry (vegan!) with rice for Karolina and me because she ALWAYS is cooking or baking for me and it was time for me to do it! Then Karolina, Marieke and I watched “Moulin Rouge” which was directed/ written by Baz Lurhman (australian) who also did the same for the movie “Australia” and “Romeo & Juliet” with Claire Danes and Leonardo Di Caprio. Moulin Rouge was even filmed in Sydney which is pretty cool and must have been nice for Nicole Kidman to be close to family and friends. (Good random movie choice seeing as I havent really seen any Oz films since I’ve been here!)

So overall, a much better day than I thought it would be!