This year I am attempting the impossible. I am teaching over 600 students and I want to remember all of their names!

Why? Because students respond much better in class when you know their name versus saying “Hey you! Red Sweater! Read the sentence!” The students already have the problem of speaking English as a second language, so if they are zoning out the best way to grab their attention is to say “MINJU!!” Generally they snap to very quickly after that.

The Inherent problems in this task:

4)    Korean Names are hard to pronounce

There is a huge similarity among Korean names. Check out Part One: Overview of Korean Names for more details.

Furthermore  in Korea it is important to introduce your  full name when you meet someone.

“My name is Jeong Seung Hyun!” the student spits out faster than a rattlesnake biting it’s prey.

First of all, too fast! Secondly, your family name is unimportant!

Family name! This is too much!!

I just want to know their first name. However, this confuses them because they always say their last name first.

So then I end up asking them “What’s your given name” which further confuses them!

Given name? What does given name mean?

Even though at this point my students have been studying English for 5 or 6 years, some students don’t know how to write their name in English and/or when they do they write it wrong.

This was a challenge for me when I first moved to Korea since I couldn’t read, write or speak Korean.  Blog post pending about the trials of trying to learn names last year.

So if I look at a Korean name written in English and try to pronounce it, I might end up saying the name wrong because it is written wrong!

Even if a student wrote their name completely right, some Korean names are REALLY hard for me to pronounce.  They are foreign and strange sounding.

I find the vowel

hard to pronounce in Korean words, which makes it difficult when I have to say the student’s name.

And this this name:

Gyuuuuu is just weird to say. So no matter how hard I might try to a say Korean student’s name I will probably mess it up.

There are many more examples I can think of, but I think you got the point.

For Girls: Long (straight or permed) & Bangs! Almost every Korean girl student has bangs and they  are CONSTANTLY brushing them.

Not to mention all my students wear the same uniform! 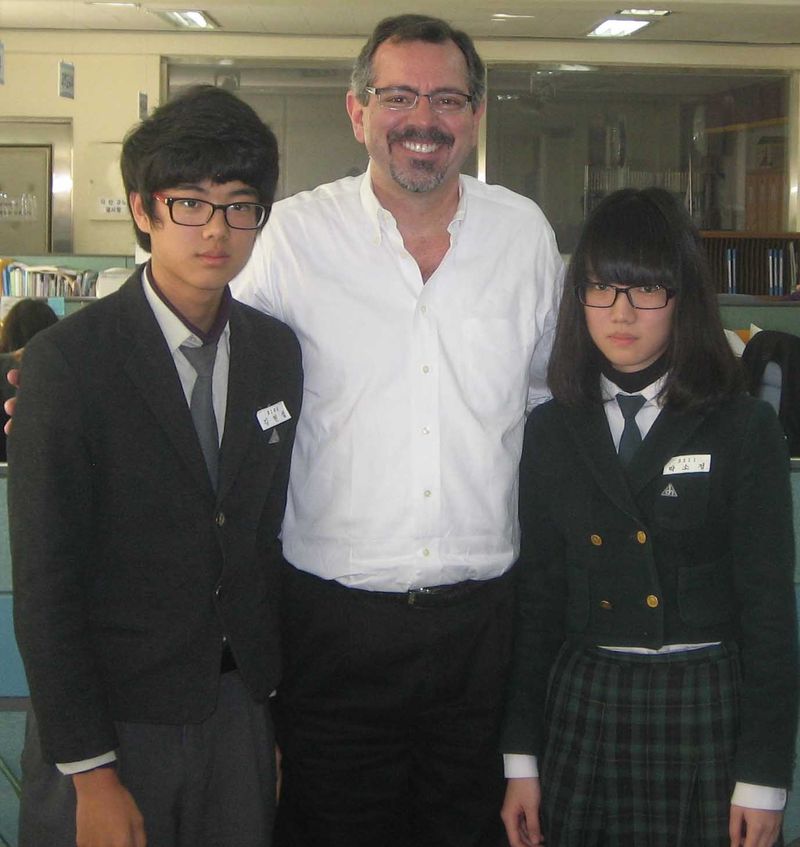 This is exactly what I am talking about. THE SAME! 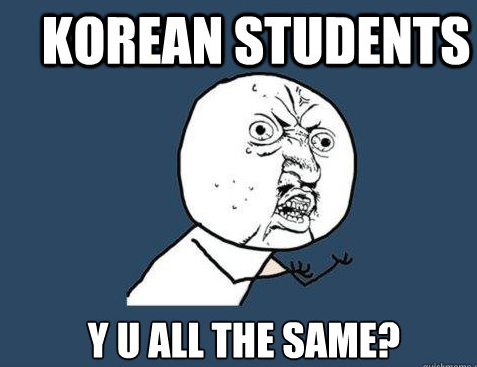 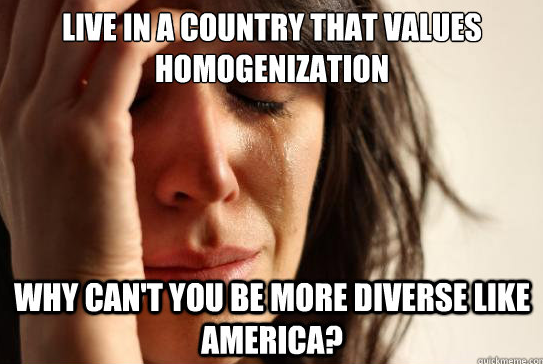 I felt like the students tended to blur together more my first semester teaching because just how similar they all looked compared to American students. American students differ vastly in both facial features and also in their style of clothing.

The loud kids in my classes are really easy for me to distinguish from the others and same goes for the kids who physical appearance sets them apart from the others. The students with a different hair style (colored! a light brown!), or  a student who wears white glasses instead of black, or who throws on a preppy sweater over their collared shirt tend to be more memorable.

But for the more quiet students, unfortunately, it was and still is lot easier for them to blend in the background since my classes are just so BIG.

–>  So what normally happens as a result of all of this:

I will ask a student their name. They will tell me “Kim Sang Jun.” I will attempt to remember their name, but won’t see the student for 1 or 3 weeks. In the meantime I have a ton of other students whose names I want to learn.

When I finally see that student in class again, the following three scenarios ensue:

2)     I will confuse him with someone else because I think he looks like “Jae Won” He’s not Jae Won. Damn.

Last year I had each student make a name tag. My vision was that they would always bring it with them to class and slowly over time I would learn all their names with the help of the visual stimulation.

WRONG! The kids would forget to bring it to class or would lose them.

As a result, feeling so overwhelmed my first couple months teaching here, I didn’t end up learning my student’s names unless they specifically sought me outside of class to talk to me a lot.  I know, I know. That’s terrible.

My only excuse is it was hard to adjust to Korea land.

Also, seating charts! I made a specific seating chart for each of my classes which I constantly refer to. Some students names I know off the bat because I talked with them a lot last year and this year.

BUT other students I hardly see, so it’s good to have a reference chart. It is my goal that within next month I will have learned most of their names!  Wish me luck with this endeavor!