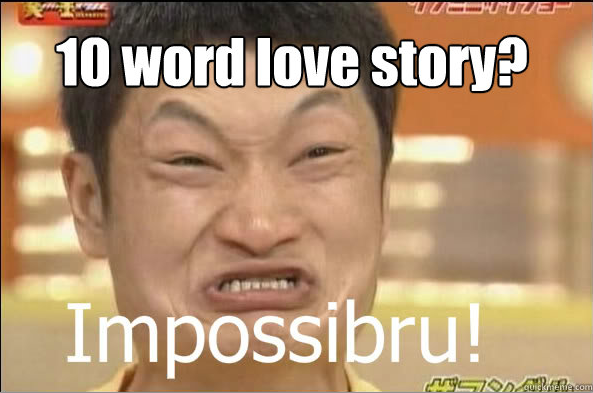 After consultation with various people, I realized that I couldn’t do a sincere love story in 10 words. So instead I wrote this:

“On the big screen: Will you marry me?

By this I mean that if someone asked me to marry them while watching some kind of sports game among a crowd of hundreds of thousands, my response would be an emphatic NO!  I would hate that kind of attention.

Thinking that my drawing skills are lacking and that there must be other girls who have rejected these kinds of proposals, I headed to youtube. The following are comics illustrating my story. Made it in Paint which took entirely too long. I miss you photoshop.

Taken from this video: http://www.youtube.com/watch?v=LH9K74IFX80

I kinda feel bad making a comic out of other people’s rejections, especially the last one. That being said though, it is a terrible proposal  idea. I also almost changed the words “Hell No” to “As If!” to make it funnier, but was limited to changing the words since I used paint.