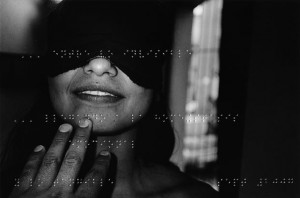 I found this photo the other day which is part of a photo gallery of photos taken by blind photographers.

According to the website,
“Born in Oaxaca, Mexico, the 42-year-old Nigenda calls his images “Fotos cruzados,” or “intersecting photographs.” As he shoots, he stays aware of sounds, memories, and other sensations. Then he uses a Braille writer to punch texts expressing those the things he felt directly into the photo. The work invokes an elegant double blindness: Nigenda needs a sighted person to describe the photo, but the sighted rely on him to read the Braille. The title of this work translates roughly to: “Between the invisible and the tangible, reaching an emotional homeostasis.”

I love that he hand punched braille into the photo. Extremely inspiring that even though he’s blind, he can still create beautiful works of art! It also reminds me to be grateful for the fact that even though I wear glasses/contacts with somewhat strong prescription, I am able to see so much of the world.  (: